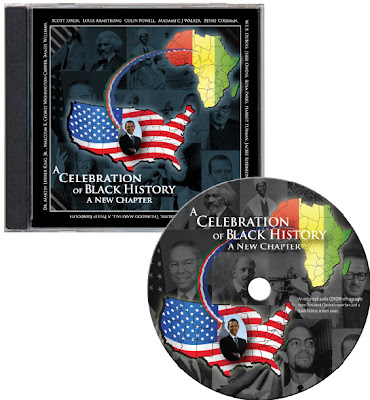 Celebrating Black History – A New Chapter: Obama CD... opens with an announcer introducing a short clip from ’s famous  “I have a dream” speech. From there, the trail takes us nearly 50 years ahead and the dream was realized when a relatively unknown African- American legislator from addressed the 2004 Democratic convention. Fast forward to Barack’s announcement in 2007 that he would run for President, then to his now famous acceptance speech on election eve in Grant and finally on to his inaugural address. Each speech is highlighted to present key elements. The narrator closes the program, but tells us that a new chapter has just begun. Historic Figure Screen Saver is included on the CD. The content of this screen saver was edited by educators to insure that it offered a balance. There are 19 Black History Notibles. While many, many noted sports and entertainment figures are omitted, four do appear. The screen saver focuses on all walks of life and history and cites many important role models. It is possible to have an embedment of a company  logo onto the screen saver and it can be a hotlink to their website.

Martin Luther King’s Birthday will be observed on Monday, January 19, 2009 and, very befitting, that day precedes  the inauguration on Tuesday,  January 20th. African American History month follows a few days later on February 1, 2009. For six weeks, the nation will be focused on the dawning of the next chapter in history.

Promotional Products have been my passion since 1972, creating promotional excellence for businesses, stores, clubs, churches, schools colleges and universities, and non-profit organizations.
I am showcasing new, different and unique products from the Promotional Products Industry which in 2018 had sales of over 22 billion dollars.
Every year thousand's of new promotional products, wearables, awards and gifts, most of which are imprintable, are offered by more than 3000 suppliers from around the United States and the world. Our largest show, the PPAI Expo, takes place every year in January where a great majority of the new products are introduced to the industry.
If you have an interest in any of these items for your next promotion, contact me... promoman at kelseypromo dot com or visit one of our website at KelseyPromo.com

an $24+ billion industry and include wearables, writing instruments, calendars, drinkware, techy items and many other items, usually imprinted with a company’s name, logo or message.

the only medium that engages all five senses. Customers can see, hear, touch, taste and even smell them. Plus, promotional products are easily affordable; yet their impression is long-lasting and readily measurable. Make promotional products an integral part of your marketing mix and watch clients grab onto your message.

According to a recent study